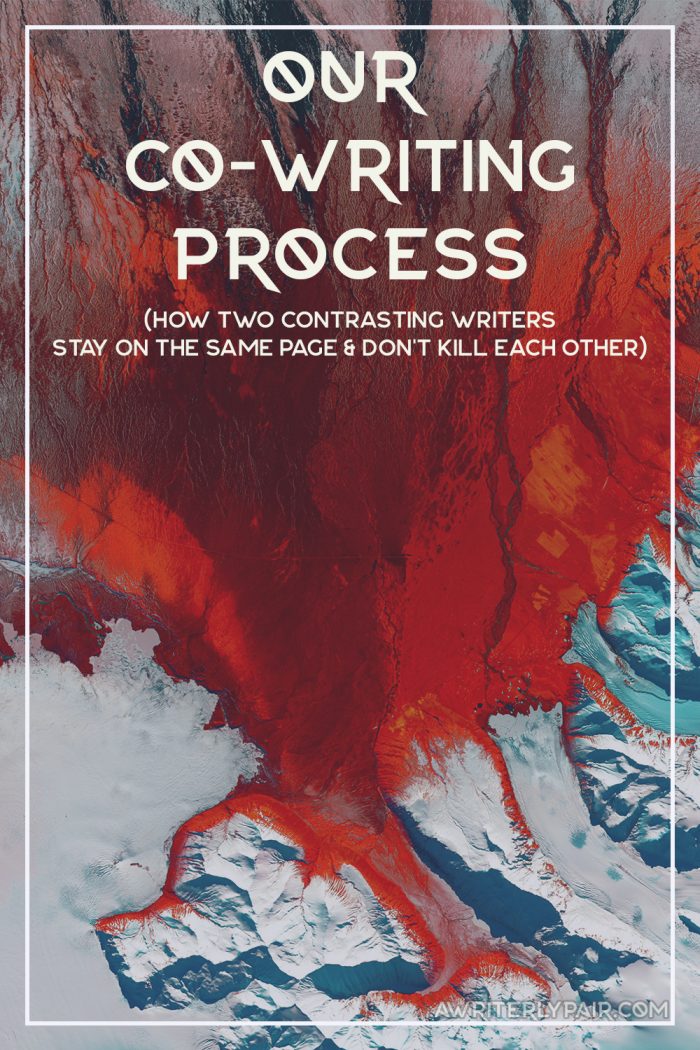 Being on the same page

When my wife and I tell people that we co-wrote a book, the most common response we get is, “how could you do that? I’d kill my spouse through the process.” Well after three divorces and remarriages we are proud to say our book is finished and our marriage counselor has been released from the loony bin. On an unrelated note he has also made a career change.

Now onto a serious answer. We’ve both had a desire to write novels since we were rowdy street youths. We both share a lot of common interests, and yet we also have enough diversity to expand our combined experience much further than we would otherwise be able to as individuals. I think that the key to our cooperation was our intrigue for storytelling and our very similar tastes in stories.

I won’t go into the details of how we started this project together, but early on in the process we realized that we each had strengths where the other had weaknesses. I am a plotter to an extent; I can look at a story and create a detailed “larger picture” that has plenty of foreshadowing while still leaving the reader surprised by the plot twists. I am descriptive in my writing as I love being able to visualize and immerse myself in a world, and giving others that same experience is paramount to me. Shy is character driven, making realistic dialog and character development the forefront of her writing. She has a passion for deep point of view style of writing making the reader more connected with the character’s voice and experience. Our individual strengths came together in a symphony of scribbles.

The Tools We Used

We wanted to be able to work on the project simultaneously, to see each other’s work as it progressed and make suggestions and/or provide support instantaneously, so we chose to write our entire book in Google Docs, using a shared Google Drive folder for all of the documents relating to the manuscript. I can’t even begin to explain how important it was to us to be able to work this way.

The Google drive folder containing our project has several different drafts of our chapters and compiled manuscripts, along with details on characters, such as backstory, resemblance images, and personality test results. We also have maps and calculations for Arkin’s travels back and forth across Iceland along with extensive research notes on Viking Age culture. All of which was created during lengthy (and sometimes heated) discussions between my wife and me about Arkin’s journey.

Now on to the nitty gritty: how we went from an empty page to a finished manuscript without killing each other. Oh goodness, the first paragraph of this article, though grossly exaggerated (We don’t have a marriage counselor), holds quite a bit of truth.

No Room for Egos

The first thing we had to do before starting a writing session was to check our ego at the door. The times we were unable to do so would usually ended up in either of us sleeping in the guest room. Thankfully we didn’t have too many of those experiences as we continued writing together. We learned to take criticism— and more importantly to give it. It took a lot of humility to finish this project, but I would argue that it both strengthened our relationship and prepared us for Alpha and Beta reader feedback.

We would schedule our sessions ahead of time, usually after the girls were in bed and our goal would be 350 words each. We put off watching shows and movies for a year just to finish Dawn of Endings. Sometimes we’d get a half-hour in, others we were able to write for four or more hours (thanks Amma and Afi for babysitting 😉)

When we started the project, we wrote out the chapter outlines: what would be happening in the chapter, what part of the main plot needed to be conveyed, what part of the subplots should be addressed, what foreshadowing should be hinted at, which characters would be present and what they were feeling, etc. This gave us the basis for what we would be writing and made it easier to pick right back up where we left off.

As we began working on a new chapter, we would divide the scenes between us based on which scene was most exciting to us individually. It was quite amazing how often we did not have any conflicts as we would be excited about the opposite scenes. However, when there would be a clash we would usually be able to work it out with a bit of bartering and bargaining (̶I̶’̶m̶ ̶n̶o̶t̶ ̶t̶o̶o̶ ̶p̶r̶o̶u̶d̶ ̶t̶o̶ ̶p̶u̶t̶ ̶o̶u̶t̶ ̶t̶o̶ ̶w̶r̶i̶t̶e̶ ̶a̶ ̶s̶c̶e̶n̶e̶ ̶I̶ ̶w̶a̶n̶t̶😉).

After each scene was written out, the other would read it through and make edit suggestions (or in some very rare cases give it a green light). The two of us would then sew the scenes together with a smooth transition. In the end, we both had impact on every scene and transition of our story, making the storytelling consistent and cohesive throughout. To ensure that the voices were always represented correctly, we spent a lot of time getting to know our characters. Imagine Charles Dickens in The Man Who Invented Christmas times two… ‘cuz there’re two of us. (1:00 mark in video. If you haven’t seen this movie, we highly recommend it!)

One of the things writers are told to do as they start a new story is to write out the first draft without looking back or attempting any spot edits. Writers should then do drafts and re-write the story until it’s as attractive and functional as can be. Co-writing a story made this approach near impossible. We were both editors for one another and we anticipated that it would be almost instantly reviewed, meaning that we almost always went back and checked our work again (and more often than not, again and again). On top of that, we had Alpha readers ready to devour each chapter as it was ready, so we would carefully read each chapter and make some final edits before we would send it to the group. In truth, we really have no clue how many edits or drafts we have made since it wasn’t done in turns, but rather in layers. I believe this method worked very well for us. Since we had two writer’s, the task never seemed insurmountable. In a way, we were our own critique partners.

Writing this book together has been such a wonderful experience. We had decided that we really want our writing careers to be intertwined for the foreseeable future. That doesn’t mean that we will always write our books together, though. In fact, currently we are working on separate books (although they are connected). We’ll be working on these books much like we did Arkin’s story, it’ll just differ in the sense that there is now an “executive” for each book. I believe that we have been lucky and blessed enough to share a passion for writing novels and similar interests in stories. I don’t think Co-writing is for everyone, but it seems to be working fairly well for us.

** Disclaimer: Do not try this at home. If divorce takes place upon attempting to recreate the steps described above, the writers of A Writerly Pair can in no way be held accountable.

If you have any questions about our process feel free to shoot us a comment!