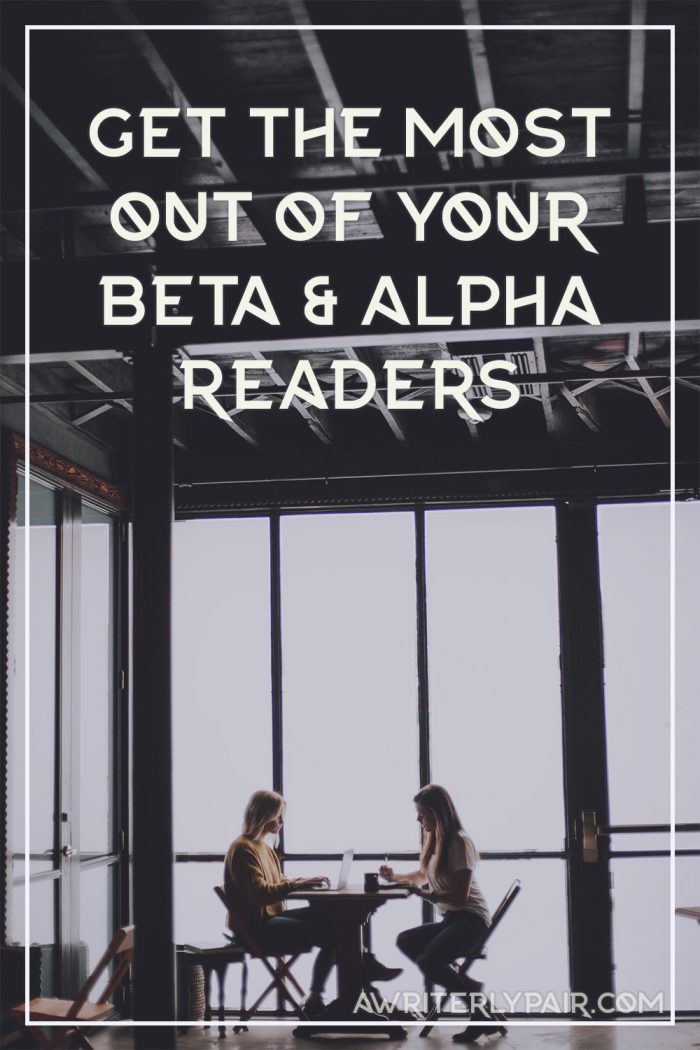 This is part two of a three part series. Check out part one here: How to be a [Helpful] Beta or Alpha Reader

Before we really get into it, I thought I’d first point out the difference between alphas and betas because I was only aware of the latter until a year or two ago. Editor and author Catherine Milos defines these two different types of readers as follows:

Alpha Readers assist writers by offering a reader’s perspective for a manuscript after an initial draft. The manuscript often has not been edited. It’s not uncommon for an Alpha to read before the author edits the first draft.

Beta Readers assist writers by offering a reader’s perspective for a manuscript which has been edited and is shortly due for publication.

Did you catch that subtle difference? Alphas are prepared to read a not-so-polished draft of your manuscript to help point how plot holes, developmental improvements, and character arc related issues. A Beta will expect a nearly-there, relatively polished manuscript. Typically these are the readers who will look at your story either right before you’ve queried agents or shortly after signing with one. Be sure to specify which one you are asking for because both require a relatively different set of skills (and patience).

1. Where to find readers:

If you have yet to establish yourself in the #WritingCommunity on Instagram, Twitter, or through your blog, I would suggest hopping on Facebook and asking your friends and family who read in your genre. This is the post that got us our beloved Alpha readers:

From what I have seen across social media and while lurking the comments sections of my favorite AuthorTubes and blogs, most writers cannot get their inner circles to engage in their work. And that’s okay. Frustrating? Definitely! But you don’t need them if they aren’t interested 😎✌

If you’re in a similar situation or would rather your friends and family not hold a piece of their fragile soul in your hands, check out this post by K.M. Weiland which includes a list a places you can find readers.

If you’re on Twitter or Discord, let me know in the comments if you want me to add you to a feedback group I’m a part of. Everyone has been really supportive and helpful in there.

Whether you’re on social media, your personal blog, or in a physical writer’s group, be sure to prepare a premise, pitch, or blurb describing your book. Here is a basic setup: An interesting character in an interesting world with an interesting problem. Provide an approximate word count, genre, and potential trigger warnings if you have any.

Luke Skywalker, a naïve farm boy with a knack for robotics, dreams of one day escaping his desert homeland in the midst of an intergalactic rebellion against a controlling Empire.

For those of you who have a Google account, Google Forms is a simple, free way to keep track of your readers and their responses. You can ask questions on a scale from 1-10, offer long answer responses, and multiple choice questions, then Google stores the answers and even provides pie charts of the recorded data.

3. Spreadsheets to see how far people get

We initially asked for people interested in reading our first chapter to see if we even had something worth pursuing. Then a handful of people kept asking for more and more each week. By the seventh or eighth chapter, though, we were curious to see how far people were getting and if there were any patterns. Sure enough, we learned that those who got passed our third chapter were more likely to finish. In our rewrites, we kept that in mind and focused on what we needed to do to improve those opening chapters.

Those in purple we considered our Alpha circle and they expressed the most interest and enthusiasm for our book. These people hold a very dear place in our hearts. Pinks were our female readers, green our male readers, and reds were the ones who either decided it wasn’t for them or never responded after sending the first chapter.

You may have noticed a lot of white space there. 😂 Out of 41 people who expressed interest in our premise, only seven have read through to the end. That’s what? 17%? I don’t know, I’m a writer, not a mathematician! 🤣 Some may consider that a less than desirable number. There are some days where that number is absolutely devastating to me. But in reality, each of these people taught us something about writing and helped us narrow down our target audience. The fact of the matter is not everyone is going to like your story. Does it make you a bad writer? No. Does that excuse you from finding ways to improve? Certainly not! Let each response or lack thereof be a stepping stone towards crafting the best version of your story you are capable of. And remember, no one will ever cherish your story more than you do. You put a piece of your soul into those 80,000+ words. If the only person you have changed through your work is yourself, you have already achieved a tremendous success. Keep your chin up and happy writing!

Part One: How to be a [Helpful] Beta or Alpha Reader
Keep an eye out for Part Three: Questions to Ask Your Beta and Alpha Readers