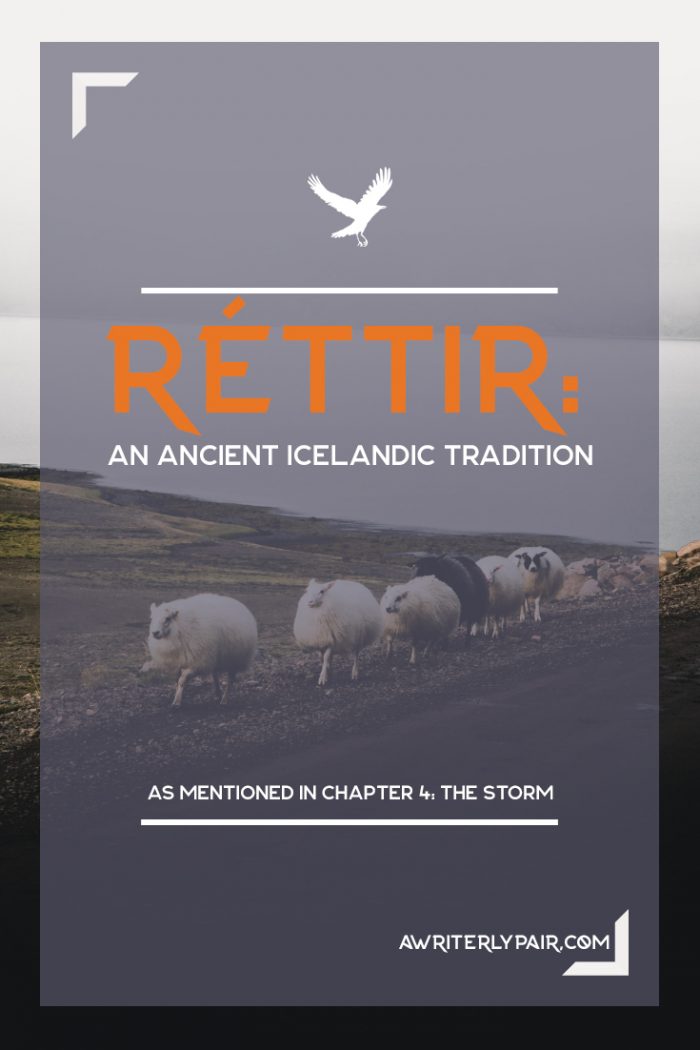 Greetings, internet humans! It is great to be back. We have been a bit out of service these last few weeks because of sickness and transitioning our toddler to her own room (no easy feat, lemme tell ya!)

We have still managed to find time and energy to write, but not nearly as much as we would have liked. That’s life, I suppose. We see the light at the end of the tunnel though, so hopefully we will be back to blazing through the pages real soon.

Still, we did finish chapters 4 and 5. It may have taken longer than expected, but it’s ready for our betas to look over. It is so satisfying to overcome our obstacles and reach a goal.

Without spoiling anything, chapter 4 centers on  a storm, and if you have ever been to Iceland in the off season, you know how nasty our storms can be.

Our protagonist, Arkin, is taught how to round up the sheep and get them to shelter.

This scene, albeit rather humorous, is actually inspired by one of Iceland’s oldest traditions, the réttir (ree-et-tir)- the annual sheep round-up. Every May, the farmers of Iceland let their sheep loose in the highlands and lowlands surrounding their properties to feed on the wild berries and other plant life. Yeah, Icelandic sheep are super crunchy and only eat an organic, plant-based diet 😉 In the beginning of September, these farmers call on the locals (and now the tourists) to help bring them back.

After months of frolicking and grazing without boundaries, sheep from several different flocks scatter and intermingle, so the volunteers bring out their Icelandic sheepdogs, horses, and ATVs to gather all the nearby sheep in a central location. The sheep population of Iceland outnumbers its human population 8:3, so this task takes a few weeks.

They are herded into the center of a corral in the shape of a wheel (réttir) and then the chaos ensues as volunteers as young as 6 will sort the sheep based on ID tags attached to their ears.

How do you lead a sheep? As our dear Nóri tells Arkin: “grab ‘em by the horns, straddle an’ lead.”

We took our daughters to our local réttir in early September. I had never actually seen it done before, so I was just as eager as our 4 year old. Matti, on the other hand, was very relieved when our youngest fell asleep during the 5 minute car ride. While he waited in the car, heat cranked up, I took E into the rain and chaos. 😬

As a side note: if you have the opportunity to come to Iceland during September, don’t let our lack for a sense of adventure deter you from giving it a try. 😁

Now, Arkin’s sheep wrangling scene wouldn’t look exactly like that. The storm happens in the early spring before the farm’s sheep are taken into the hills, so he and the freemen only deal with a handful of them. Other than that, this is as accurate as you can imagine without being transported centuries into the past.  One of the things I love about Iceland, though is that it has one foot in the modern world and the other deeply rooted in its ancestor’s traditions. Time travel is pretty much an every day occurrence here 😉